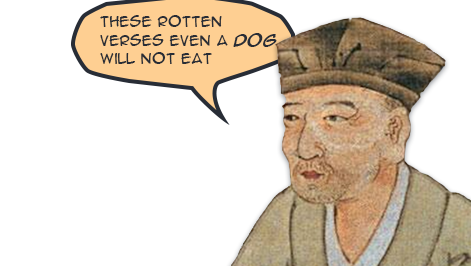 Haiku, as far as I can tell, is some sort of Japanese poetry.

There are many rules and traditions when writing formal haiku, but the advantage of bad haiku is that you don't really have to follow any of them. On this site, most people do 17 syllable haiku structured in a 5 / 7 / 5 form.

The Bad Haiku site has been on the internet and accepting poetry since 1996. It is lightly moderated.

In this iteration of the site, the header grapic is a slice of a ukiyo-e painting by Uehara Konen (1878-1940). The image of Matsuo Basho in the top right corner is by an unknown artist.

Bad Haiku is one of the longest running sites accepting user submissions on the internet. It has been featured in many newspapers and magazines over the years and has been included in the Library of Congress’ “September 11, Web Archive”: